The red kite (Milvus milvus) is a medium-large bird of prey in the family Accipitridae, which also includes many other diurnal raptors such as eagles, buzzards, and harriers. The species is currently endemic to the Western Palearctic region in Europe and northwest Africa, though formerly also occurred just outside in northern Iran. It is resident in the milder parts of its range in western Europe and northwest Africa, but birds from northeastern and central Europe winter further south and west, reaching south to Turkey. 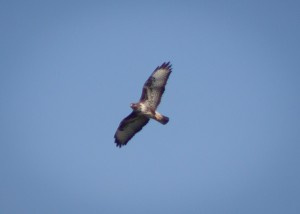 Vagrants have reached north to Finland and south to Israel, Libya and Gambia.

Red kites are 60 to 70 cm (24 to 28 in) long[4] with a 175–179 cm (69–70 in) wingspan; males weigh 800–1,200 g (28–42 oz), and females 1,000–1,300 g (35–46 oz). It is an elegant bird, soaring on long wings held at a dihedral, and long forked tail, twisting as it changes direction. The body, upper tail and wing coverts are rufous. The white primary flight feathers contrast with the black wing tips and dark secondaries. Apart from the weight difference, the sexes are similar, but juveniles have a buff breast and belly. Its call is a thin piping sound, similar to but less mewling than the common buzzard. There is a rare white leucistic form accounting for approximately 1% of hatchlings in the Welsh population but is at a disadvantage in the survival stakes.

The red kite’s diet consists mainly of small mammals such as mice, voles, shrews, young hares and rabbits. It feeds on a wide variety of carrion including sheep carcasses and dead game birds. Live birds are also taken and occasionally reptiles and amphibians. Earthworms form an important part of the diet, especially in spring. 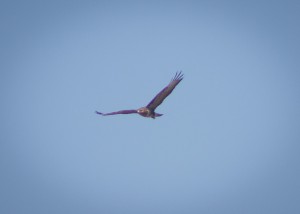 As scavengers, red kites are particularly susceptible to poisoning. Illegal poison baits set for foxes or crows are indiscriminate and kill protected birds and other animals. There have also been a number of incidents of red kites and other raptors being targeted by wildlife criminals.

Red kites inhabit broadleaf woodlands, valleys and wetland edges, to 800 metres (2,600 ft). They are endemic to the western Palearctic, with the European population of 19,000–25,000 pairs encompassing 95% of its global breeding range. It breeds from Spain and Portugal east into central Europe and Ukraine, north to southern Sweden, Latvia and the UK, and south to southern Italy. There is a population in northern Morocco. Northern birds move south in winter, mostly staying in the west of the breeding range, but also to eastern Turkey, northern Tunisia and Algeria. The three largest populations (in Germany, France and Spain, which together hold more than 75% of the global population) declined between 1990 and 2000, and overall the species declined by almost 20% over the ten years. The main threats to red kites are poisoning, through illegal direct poisoning and indirect poisoning from pesticides, particularly in the wintering ranges in France and Spain, and changes in agricultural practices causing a reduction in food resources. Other threats include electrocution, hunting and trapping, deforestation, egg-collection (on a local scale) and possibly competition with the generally more successful black kite M. migrans.